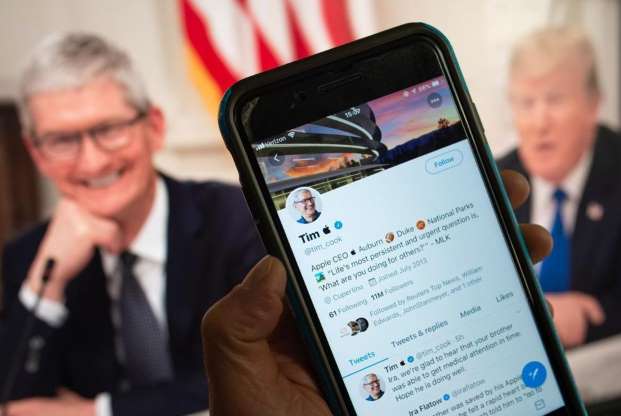 It was an absolute awkward slip of the tongue, normal for Trump, but it was also an opportunity for the CEO of Apple Tim Cook to poke some fun back at the president, who has often gone head to head with the technology industry.

One day after president Trump inadvertently referred to Tim Cook at one of the White House meetings as ‘Tim Apple’ – a mistake that most people could make – The Apple CEO secretly changed his Twitter profile name, by removing his last name and replacing it the Apple logo.

The change was not publicly acknowledge by Cook but it did not take too long for Apple followers and fans to notice the change and spread it across the world. For a non-Apple using fan, they may not get the joke as The Apple CEO’s Apple logo icon was only visible on iPhones, Mac Computers and Apple devices. On a Windows device, it is blank square; on an Android device it would render as either a blank gray rectangle or an X-ed out.

Tim Square is definitely not the connotation the Apple CEO was going for as Apple personnel typically refers to its own devices and software over all others. However, Apple had no comment on the query about the logo mishap, if it was indeed a mishap.

Meanwhile, in the White House, it seems that they are engaging in some damage control. The official transcript of the meeting, there is a hyphen between the words “Tim” and “Apple” as if there was a pause between them and that the president was meaning to thank both the Apple executive and the company itself.