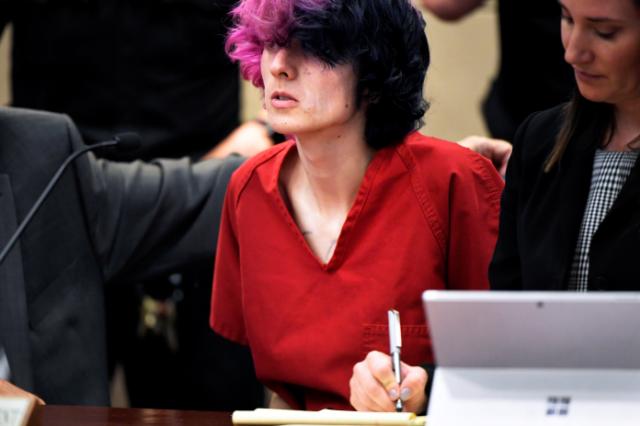 On Wednesday, a day after their arrest on suspicion of murder and attempted murder, two teenage students made separate court appearances, accused for fatally shooting a classmate and injuring eight others in a school located in Denver suburbs.

Judge Theresa Slade from the Douglas County District, presided over the case for both proceedings and ordered that the two suspects be held without bond, pending their next court dates, which has been set for Friday, formal charges are expected to be filed then.

The youngsters are accused of opening fire with handguns on their fellow students on Tuesday in two separate classrooms at the STEM (Science, Technology, Engineering and Mathematics) School, located in Highlands Ranch, Colorado, which is approximately 25 miles south of Denver. The two boys were arrested by the police after some of the students that were under fire, fought back, including survivor Brendan Bialy, a young U.S. Marine recruit and victim 18-year-old robotics enthusiast Kendrick Ray Castillo.

Denver Fox news affiliate Fox 31 reported Castillo’s father as saying that his son “gave up his life for others, if he didn’t do it, what would this mess look like?”

The first defendant, Devon Erickson, 18, who prosecutors said they were treating as an adult, sat silently at a small table with his head bowed, hands shackled to his waist, flanked by two defense lawyers as a pair of sheriff’s deputies stood just behind them. Erickson’s 16 year old accused accomplice, was referred to in court by hi lawyer as Alec McKinney, however the name listed on the court docket was Maya Elizabeth McKinney, but was addressed during the hearing as Mr McKinney by the judge. According to Denver’s ABC television affiliate, which cited an unidentified police source, reported that the youngster identified as transgender and was alleged being bullied at school for it.

While the hearing of Erickson was televised live, the judge closed the hearing for McKinney to any cameras. According to the District Attorney George Brauchler, a decision will be made by Friday whether they will charge McKinney as an adult or juvenile. McKinney who appeared in court dressed in dark blue jail garb, said very little and when he actually spoke, answered in a very soft tone. When the judge asked the defendant if there were any questions, he replied, “No your honor”. The defense request to unshackle McKinney for the hearing was denied by the judge. No pleas were entered.