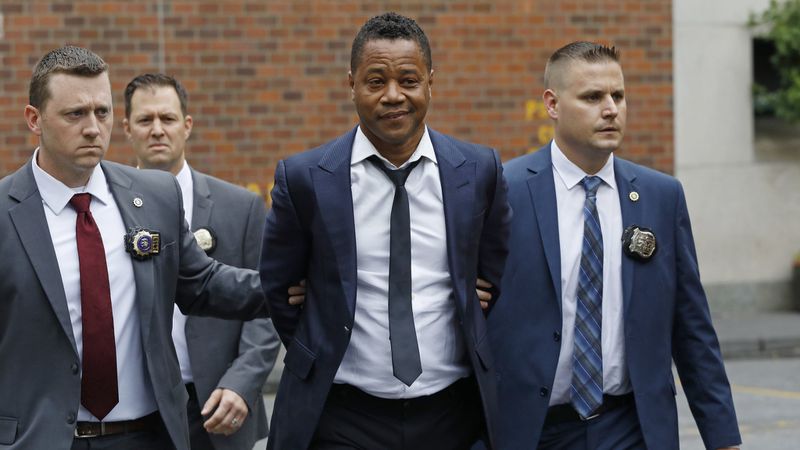 A video has emerged allegedly showing the moment Oscar-winning actor Cuba Gooding Jr. made contact with the leg and then breast of a woman in a New York nightclub.

Gooding was paraded in handcuffs on Thursday by the New York Police Department after he was charged with forcibly touching. His legal team, however, believes that the video exonerated Mr Gooding Jr. Mark J. Heller, Gooding’s attorney, stated that he was “shocked and horrified” that the case was being prosecuted after he presented police with the video from New York’s Magic Hour Rooftop Bar & Lounge.

On Thursday, Heller said in a report that the “almost two hours of tape” reviewed by his team and authorities prove there is no criminal behavior.

Heller went on to say, “we have reviewed the tapes, and we do not see any criminal conduct having been perpetrated on his part, he respects women. I’ve known him for over 30 years, this is not something he would do.” The video which was posted by TMZ appears to be very ambiguous. It shows Gooding and his girlfriend, Claudine De Niro sitting on a couch in the Magic Hour Rooftop Lounge in Manhattan when the woman who would later accuse him of forcible touching sits down next to them.

Almost instinctively Gooding reaches over De Niro, and places his hand on the woman’s left thigh. His hand then moves up towards her breast, and the accuser puts her hand on his. It is very unclear the actual reaction from the lady. Afterwards a man then walks up to the group, puts his hand on Cuba Gooding’s shoulder, lean in and speaks to the group. The man then what looks like straightening up, begins to gyrate before taking a drink. The group then part ways.

Approximately thirty minutes after, the video footage shows Cuba Gooding and Claudine in a different area of the bar, being approached by the accuser who speaks to a security guard who is minding the celebrity couple. Cuba then proceeds to get up and leave, followed closely by Claudine. In a criminal complaint released by the Manhattan District Attorney’s office, investigators said the woman said she “observed the defendant place his hand on her breast and squeeze,” and that “she did not consent to the defendant touching her breast.”

The 29-year-old woman, who has not been identified by authorities, told the police that she noticed Gooding Jr. was “heavily intoxicated” and offered him a cup of water, a senior NYPD official told The Daily Beast.

Comments
Loading...
previousJoe Biden’s Health Is Being Questioned By Fox News Stars
next$1 Billion Worth Of Cocaine Seized